What to Eat in Eunos: Foodies Top 6

Getting to know Eunos

Before we find out what to eat in Eunos, let’s go ahead and learn a bit about the area. Eunos was a Malay village called Kampong Melayu before. Until they renamed it to honour its founder Mohammed Eunos Abdullah, it was a cosy neighbourhood in the eastern region of Singapore. So you won’t have a problem accessing this place because locals can easily reach it using public buses and the Eunos MRT station.

With a wider variety of outdoor activities, lesser crowd and a more peaceful way of living. Eunos attracts more families that enjoy a calm and cosy ambience. It is a famous hawker stall that has been around since the 1960s. So here are the top 6 places that foodies recommend:

As the origin of the Bak Chor Mee, it goes back to the 1920s when it was founded.
With Ler Jie Wei, as the 5th generation owner of the stall, he still keeps the recipe passed down by their great-great-grandfather, which continues to give our taste bud an amazing treat up to this day.

Their simple bowl of noodles is not something that can be just put aside. The taste of the soup is enough to understand why their stall makes history. They did well in braising the significant quantity of pork bones slowly. The noodles are al dente and springy, and their minced beef is full of flavours and tender. While their hand made pork dumplings are well seasoned and not dry. And they infuse the dish with pork lard and garlic to complete the flavour and aroma of the soup. They also have a dry version of their famous bak chor mee that you can try. And experience a tangy and spicy taste!

You can visit their place at 7 Eunos Crescent, Hong Lee Coffeeshop, Singapore 400007 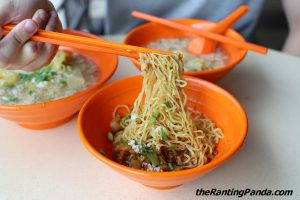 A father and son duo are the ones managing Anak Bapak. It has been in business for more than 20 years already. Mr Kamal said that many of his customers like his Beef Bak Kut Teh and noodle dishes. Their Beef Bak Kut Teh here is Halal friendly.

Served in a clay pot, Beef Bak Kut Teh is hot. The aroma of the herbs and garlic that they use will instantly fill your nose. The herbal flavour was strong with a subtle beef flavour, but it was not overwhelming. It is the perfect combination of the taste that makes the soup the highlight of this dish. Mr Kamal uses beef ribs then slow cooking them to perfection to make them tender, which they serve with flavourful chicken rice. When I got to try it, the yummy welcoming taste of chicken rice wowed me. Also, their homemade sambal chilli receives a wow from me. It gave the whole dish an extra fiery touch. A meal you can include on what to eat in Eunos. 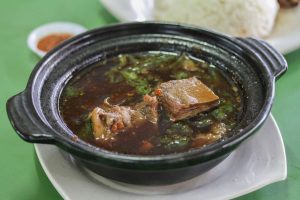 Biryani lovers are also health-conscious. So they don’t need to deprive themselves of their favourite dish. Mami Midah Briyani is famous for its healthier version of biryani. Mr Kassim and his mom manage the establishment. In what to eat in Eunos, this store has already been on countless media platforms. They make their food healthier by substituting ingredients high in sodium and saturated fats with healthier alternatives.

You will only see two dishes on their menu, Chicken Biryani and Mutton Biryani. To which they serve both dishes with equal amounts of soft basmati rice. It is also carefully topped with achar and served with a small bowl of dalcha. The mutton and chicken are well marinated and cooked perfectly, giving them a tender and juicy texture. This light and less oily version of biryani are true enough to be healthy and delicious. 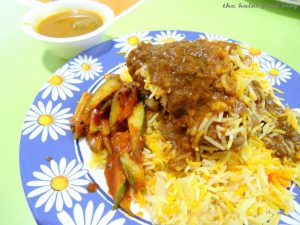 What may look like an ordinary bowl of Fish Soup to you may hide their true identity under their flavours. At first, I didn’t know why people talked about Hai Xian Zhi Jia’s fish soup because the visual aspects looked like what the others were also serving. But when I got to taste the dish myself, I instantly fell in love with it.

The Sliced Fish Soup is prepared using the freshest fish and ingredients. The soup has the elements that a good fish soup should have. It has this bursting umami flavour, light texture and transparent facade. Aside from the fish, the bowl is also composed of tofu, bitter gourd and cabbage. This light and warm soup are perfect for cold and rainy days. 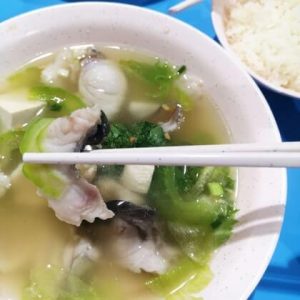 This family-owned eatery has been in business for more than 30 years already. You can find this stall tucked in the corner of Eunos Crescent Market. I like this stall because they served a significant portion of their decent dish at an affordable price. The right place for someone thrifty like me.

Their popular Char Kway Teow is made special with cockles, egg, sausage, and vegetables stir-fried in a wok. The dish has a welcoming refined sweet taste and a subtle churned flavour. This dish has a homey feel to it.

Another stall that is making a name for its delicious Bak Chor Mee is Eunos Minced Meat Noodles. This stall near Eunos MRT is only open from 6 am to 1:40 pm. So you have to wake up early to try this stall. Their noodles come with soup and a dry version. This place is not as popular as the Famous Eunos Bak Chor Mee. But it is not falling back when it comes to serving delicious bak chor mee.

They serve each bowl of noodles with a generous amount of minced meat and noodles nestled on the soup that gives a rich and savoury taste. They are serving a bowl of dumpling soup with their dry versions of noodles. Both versions are paired with chillies if you want them to be spicy. 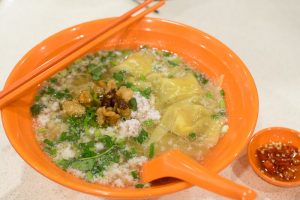 We hope that you enjoy the many delicacies available in what to eat in Eunos. From noodles, biryani and many more to fill in your hunger and satisfaction for good food. Be sure to visit and check out the area for a legit moneylender, such as Cash Mart. You can avail of their personal loan at a low interest.